We celebrate the courage of mom Johane Fores and her little guy Johson who was born with Tetralogy of Fallot, a congenital heart defect, as a 33 week preemie. We salute Johane for her strength and endurance, and love and celebrate our little warrior, Johson!

They live on different coasts thousands of miles away. Billy’s father is Jimmy Kimmel, late night talk show comedian, who days after his baby’s heart surgery, in 2017, visibly tearful, addressed his fans to talk about his infant son’s surgery said, “ No parent should have to decide if they can afford to save their child’s life – It just shouldn’t happen – not here”

Two adorable little boys born just 18 months apart with the same defect. For Johson Lue Shue, life is as different from Billy’s as the coasts that separate them. Johson Lue Shue was born to his loving mom Johane Fores and dad , in South Dade Florida. Billy’s family is famous and access to the very best heart surgeons and specialty doctors, comes easy. For Johson, the stars aligned and his surgery was performed by one of the finest pediatric cardiac surgeons in the country, Dr Redmond Burke, at Nicklaus Children’s Hospital and his recovery.

For both families, the emotional challenges they endured as their baby boys went through critical heart surgery was the same. It is a tough, overwhelming journey. The holes in the wall separating both chambers of their tiny hearts had to be repaired to stop the backing up and mixing of blood; tiny, narrowed pulmonary and aortic valves were opened like the wings of a butterfly to allow blood to flow unrestrictedly to the lungs and once oxygenated, back to the heart and body. A child may take days or months to recover; there may be multiple surgeries.

For Johson there were extra complications. His heart condition was diagnosed in utero and at just 33 weeks, Johane was advised to have an emergency C-section – it was critical to his survival to get him out with no guarantees of survival. A newborn’s heart is the size of an acorn, their arteries and veins as fine as Angel hair pasta. Johson at 33 weeks was way too small for any surgery. He also had additional complications….

Johane moved in with her mom to help care for their then, three year old daughter and nightly, she journeyed by train from Florida City to see her baby in the NICU at Jackson Hospital, on the north side of the city of Miami. It was a grueling, life changing time for Johane.  But there was no choice – he was a fighter and so was she. At 4 months old, Johson was ready for discharge – a preemie, with acute health conditions needing serious full – time care. His surgery was planned for when he was 8 months old. A social worker at Jackson recommended that Johson would be given the level of vigilant care he needed at PATCHES PPEC, non-profit nursing center in Florida City.

PATCHES exists right in their neighborhood.  They toured, registered Johson as quickly as possible and Johson became a beloved patient at PATCHES.  Johane felt so safe with Johson under the vigilant care of the professional nursing staff at PATCHES. In her own words “where they treat not only my child, but care for our family”, where holidays are celebrated and where, when they see something that concerns them, they call me right away and alert me to get it taken care of. The kind of heartfelt care that when he was hospitalized at Nicklaus, his nurses were calling in to check on his progress.

His surgery was delayed by multiple health setbacks, endocarditis, viruses and finally the COVID pandemic.  The nursing staff at PATCHES was there for Johane and Johson every step of the way. Johane was fearful, but his health had deteriorated and intervention was critical. A few months ago, at 21/2 years old, Dr Redmund Burke successfully performed Johson’s complicated surgery at Nicklaus Children’s, and at PATCHES, where he is loved and cared for like their own son, Johson took his first steps in the physiotherapy room, to the delighted cheers of his therapists!

To Johane, despite ongoing health issues, he is a better version of himself – energized, happier and despite setbacks, clearly a healthier little boy – ready to take on life! 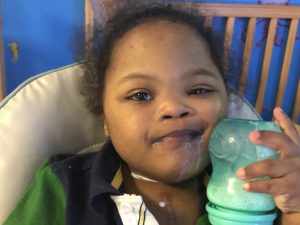 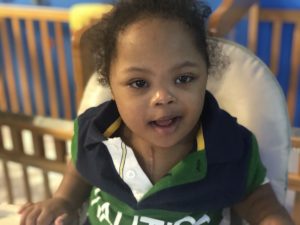