We took our Isabelle home after 170 days in the NICU. She had been born at 25 weeks gestation and she’d never left the hospital, never been outside… The doctors didn’t want us to, but we insisted. She was still dependent on supplemental oxygen and a nasogastric feeding tube that went from her nostril to her stomach, but we couldn’t spend another day waiting in the hospital. For months, we had been surrounded by buzzing hospital staff and the incessant beeping of sirens going off as the smallest children coded from their impossibly small hospital beds. We were used to untangling the web of wires and cords from Isabelle’s little body every time we wanted to pick her up and comfort her, but it was time to be able to do that from our own space. We were terrified, but I thought to myself, I can stay up the whole night if I need to. I cried as we drove home. We had finally broken out.

But being home was not easy. We’d internalized everything that we needed to know—how to thread thin feeding tubes into her nose, down her throat and through her esophagus, taping it as neatly and quickly as we could to her red cheeks, which were blistered and scabbed from months of medical tape. I just wanted to see her face. We’d only had a few short glimpses of her face free from all of the tubes and tape. I could hardly tell what she really looked like behind it all. I wanted her not to grimace and turn her face when we kissed her, scared that we were invading her face with more things. I hadn’t realized this would be one of our biggest hurdles. All the months of facial intrusion and suctioning in the NICU had made her so mortified that she had become totally food and touch averse. It would be years before she would eat normally or stop raising a hand in defense whenever we approached her.

The first few months, my husband and I navigated it all together. We shared the round the clock tube feeding, endless trips to medical specialists, day long visits to the cardiologist, and trying (yet failing) to ever get Isabelle to drink from a bottle. We had three therapists coming to the apartment eight times a week every week between all the hospital visits to help with feeding, gross motor, and fine motor development.

I slept little, cried a lot, and cursed as she spat up the countless ounces of milk I tirelessly tube fed into her rebellious stomach.


I was suffering from quite a bit of PTSD from the times I’d seen Isabelle almost die and code in the NICU, the experience of the open- heart surgery she’d had to have to survive when she was in the hospital, and the months of living in a children’s hospital surrounded by pediatric sickness and death. There was hardly time for me to shower, let alone breathe, and it was incredibly lonely. I had left my small business in the dust and I rarely spoke to my friends.


But we eventually started to see the light. She slowly, but surely weaned off her oxygen. The trips to the doctors remained but they became less frequent. And by the time she turned 1, she would finally let me feed her a small portion of milk via syringe. It would be a whole other year before we were able to totally remove her G tube, but we got there.

Now she is almost three, and she runs and plays and her cheeks are free and beautiful. She has a constellation of scars that run all over her body—the long line down the center of her chest, the tiny dots by her neck, hands, and feet, and a hole to the left of her belly button where her G tube used to be. But to anyone that passes her on the street, she looks like just another kid, and I am endlessly thankful. I am thankful to have her. I am thankful for these lives, which she and I almost lost during that painful year, and I am thankful to be able to hold her and kiss her without climbing through a maze of cords and wires. We still have our hurdles to overcome—therapy visits and cardiology needs that will probably extend her whole lifetime—but we are grateful to have come so far and be where we are. 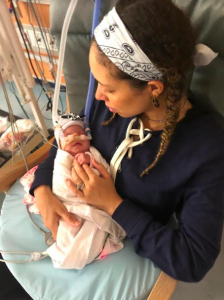 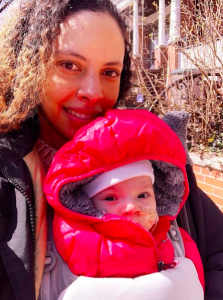 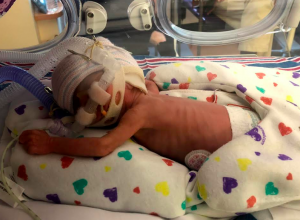